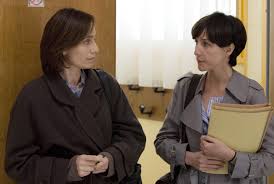 I love French movies. This is one I've been meaning to watch for awhile. I've read reviews by many of my fellow bloggers. I also remember Roger Ebert making a big deal out of Kristin Scott Thomas not getting an Oscar nomination for this. This is a peculiar film. I loved it, up until the very end. The last 5 minutes of the film made me go "wait a minute.." but they didn't ruin the movie for me. I'm going to explain why at the end of my review. I'll use a spoiler warning.
Juliette (Kristin Scott Thomas) has just gotten out of prison. She served 15 years for killing her 6 year old son. She's moved in with her younger sister Lea (Elsa Zlyberstein) who was only a child herself when Juliette was sent away. She has a hard time adjusting, but Lea's family is kind for the most part. We see her navigate her way through her new found freedom and eventually learn the truth about why she killed her precious child.
I think as a parent you automatically want to judge someone for killing their own child but in a strange way, I didn't judge Juliette. I patiently waited for her explanation, because I knew she had one. (Or she was going to be a psychopath and I was going to be very surprised) Kristin Scott Thomas did give one hell of a performance, as did Zlyberstein. Everyone in Lea's family and circle of friends felt perfect. Her children love their auntie unconditionally, even when she's not exactly kind to them at first. When Lea finally asks Juliette "why?" the outcome is devastating. My first reaction was to cry, but after Juliette gives her full explanation, it was like I sucked up all of my tears and went "wait..."
Why am I including a film like this in my Indie Gems if I didn't like the ending? The truth is, there are movies I enjoy where the endings aren't satisfying. (The Butterfly Effect immediately comes to mind) This film is a wonderful, and the performances are strong, and even though I thought the ending was border lining on cop out territory, I still liked the film, and I still think you should see it.
Grade: B
Memorable Quote: "The worst prison is the death of one's child. You never get out of it." - Juliette (Kristin Scott Thomas)
**************SPOILER ALERT*************************************
Now on to that ending. We find out that the reason Juliette killed her son was because he had some terminal illness that they never name. She never spoke during her trial, so no one else knew about it. I find that very hard to believe. She was a doctor, she caught the warning signs early, and did all of the tests herself. (Without her colleagues noticing, I guess) and it was debilitating enough for her to take him away, throw him a little party, and mention "at that point, he could barely move." All of this without the boy's father noticing. She euthanizes him to put him out of his misery. Did the authorities not do an autopsy on this kid? Could they not tell that A) she euthanized him and B) He was suffering from some kind of terminal illness that apparently caused him to be immobile? An autopsy would show all of that, and I assume that would all be in her trial. So if she remained silent, wouldn't those two facts put together kind of give you an idea as to why she did it? Her family was clueless to her motive. That could explain her light sentence of 15 years, but that doesn't explain everyone in her family not knowing why she did it and completely disowning her. Perhaps the parents knew and just chose not to explain it to Lea? Was this story not in the news? I don't know how the judicial system works in France, but while all of this was a very devastating story, I just can't see it flying in real life without people at least "understanding" (not accepting) why she did what she did. I can't see anyone being completely in the dark to her motive.
﻿
Indie Gems