10 Times Movies/TV Have Left Me Speechless

- March 12, 2013
This is the start of a series of 10. Over the next few weeks I'm going to have 10 different posts of 10 different films/TV shows and various reactions from them. They will be under the label "10 Series"

It's not often I'm left speechless, but there have been a few instances in TV and film where I literally had nothing. What I saw before me was so powerful or so outrageous in that instance, that nothing I could say would sum up what I was feeling.

10 Times Movies/TV Have Left Me Speechless

1) The last 15 minutes of Audition.
Audition really builds up to it's finale. We know something messed up is going to happen, and when it does, I had my hands over my mouth for the entire scene. 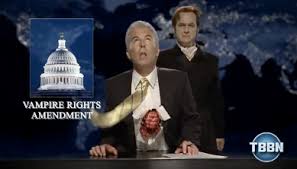 2) Russell Edgington's news report on True Blood
When crazy 3000 year old vampire Russell drops in unexpectedly on the nightly news, he rips out the anchor's spine, threatens all of humanity ("We will eat you, after we eat your children!") then casually throws the weather to Tiffany. I was so shocked that I couldn't even laugh right away.

3) The Lily of the Valley on Breaking Bad
Another part of this episode appears in a later chapter in my 10 series. When we finally find out just why poor little Brock is in the hospital, the camera pans to a plant in a certain someone's backyard. That scene spoke 1000 words, and all I could do was gasp. 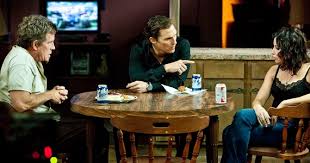 ﻿
4) The chicken scene in Killer Joe
I couldn't even muster an "Oh my God" during this brutal scene that Matthew McConaughey absolutely sells. No more KFC for me.

﻿
5) The Pencil trick in The Dark Knight
I saw this at midnight on opening night. When The Joker made that pencil disappear, me and the entire audience gasped, and clapped about a full minute later. 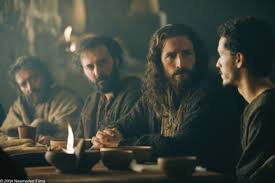 6) The Passion of the Christ
Despite my feelings towards Mel Gibson and this piece of work, I don't think anyone had much to say leaving the theater after this. Everyone just kept their heads down. (I didn't even want to use a gory picture from that movie because it just makes me that uncomfortable.) 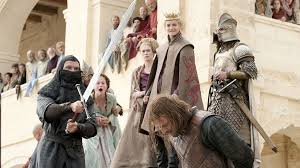 7) Ned Stark in Game of Thrones
I hadn't read the books prior to seeing the first season of Game of Thrones. You think the main character is safe? HA! George R R Martin doesn't think so. I kept telling myself. "He'll get out of it somehow" until the very last second. I couldn't stop staring as the credits started to roll.

8) Drive Elevator scene
I didn't watch very many trailers of Drive before I saw it. So I wasn't expecting it to be so violent. I certainly wasn't expecting The Driver to beat someone to death in an elevator.

9) There Will Be Blood bowling alley scene.
This scene really sums up how great of a movie this is. It was just insane and shocking. I think another reason this left me speechless was because I was initially watching it online on some Japanese website that streams movies that are still in theaters (I would not recommend doing this, neither would my hard drive) and they cut out the scene of the man walking back to get Daniel's food. So all they showed was him beating Eli, saying "I'm finished!" and then the credits rolled. It all happened so fast.

﻿
10) Departed elevator scene
I so did not see this coming. Leonardo DiCaprio and Matt Damon are just talking, la-dee-da and BAM! DiCaprio is shot in the head. What the actual fuck? My jaw hit the floor.