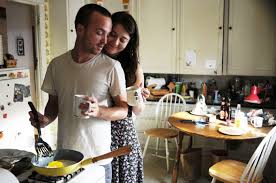 Kate (Mary Elizabeth Winstead) likes to drink. I'm not talking a glass of wine at dinner drinking, I'm talking total blackout, waking up in your own piss kind of drinking. After a long night of drinking, Kate ends up vomiting in front of the 1st grade class she teaches. When one of the children asks if she's pregnant, she stupidly says that she is. The Principal (Megan McNullie) is excited for her and throws her a baby shower. Vice Principal Davies (Nick Offerman) however, saw Kate drinking in her car that morning and knows the truth. He introduces Kate to AA meetings, and to her sponsor, Jenny. (Octavia Spencer) Kate tries hard to get clean, but it doesn't have a positive effect on her husband, Charlie (Aaron Paul) who continues to drink
Mary Elizabeth Winstead gives on hell of a performance here. She was absolutely convincing as an addict. Someone could've easily went over the top with this, but Winstead really captures the struggles Kate goes through and none of it looks forced or comical. This really is her movie. Paul, Spencer, and Offerman are perfect in their small roles, but the bulk of the film rests on Winstead's shoulders. I think this will be a very educational film in the future. It could possibly be shown to young people that fall into alcoholism. We really see Kate hit rock bottom, and even when she's sober for a year, it's still an up hill battle. It doesn't try to simplify anything. Alcoholism will ruin your life, and getting over it make add an additional hit or two, but ultimately, it's for the better. This film really shows that.
Recommended: Yes
Grade: A

Memorable Quote: "I can't be sober when I'm with you!" - Kate (Mary Elizabeth Winstead)﻿
Indie Gems