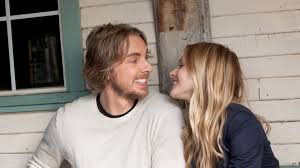 I watched this movie less than 12 hours ago, and I'm struggling to remember what happened. This should tell you how memorable this is.

Charlie (Dax Shepard, also the film's writer and director) is a former getaway driver in the Witness Protection Program. When his girlfriend, Annie (Kristen Bell) has a chance at her dream job in LA, Charlie risks leaving the his safe spot to drive her there. Too bad Annie's crazy ex (Michael Rosebbaum) has figured out Charlie's real identity and notifies the former friend he ratted out, Alex (Bradley Cooper) of his whereabouts.

It's not that Hit and Run is a bad movie. It's not good by any means, but it isn't horrible either. It's just plain forgettable. Shepard and Bell have obvious chemistry (they date in real life) and it's easy to see why Charlie and Annie are so compatible. Some of the things they joked about sounded like something my husband and I joke about as well. When they are together, they are the best part. As interesting of an actor as Bradley Cooper is, even he isn't given much to do. A few gags that turn into run on side plots don't help this film either. I wouldn't be opposed to seeing Dax Shepard direct another comedy in the future, but this one was really lacking.