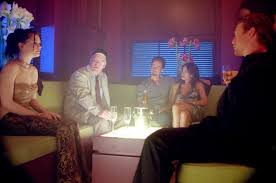 This is the situation Monty (Edward Norton) is faced with. After being ratted out to the DEA, Monty has one last day to re-evaluate his life before he goes to prison for 7 years on a drug charge. He spends it with his friends, Jacob, (Philip Seymour Hoffman) and Frank (Barry Pepper) They eventually meet up with Monty's girlfriend, Naturelle (Rosario Dawson) and on their way to a club, cross paths with Jacob's young student, Mary (Anna Paquin) who he seems to be fascinated with. There's plenty of flashbacks throughout to show us how Monty got to this point.

This is my favorite Spike Lee movie. The acting is strong, the writing wonderful, and the score is fantastic. Ed Norton does a great job with Monty. (There's a really brilliant scene where he's talking to himself in the mirror) Even though he has clearly done bad things, we feel sorry for him because we know that seven years in prison will change his life drastically. Naturelle will more than likely move on. Who knows what his friends will be doing. There's a subplot between Seymour Hoffman and Paquin that I enjoyed as well. It may come off as typical teacher has a crush on a student schtick, but they take it to just the right place without going too far. (Although I would've preferred some follow up with that story)

This film really is the whole package, and is a must see for fans of Norton, Seymour Hoffman and Paquin.