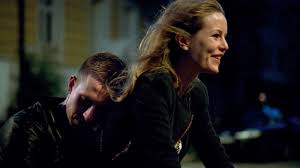 Anders (Anders Danielsen Lie) is a recovering addict that is finally granted a leave from rehab to apply for a job in Oslo. While he's there, he meets up with old friends, some are happy to see him, others are not.
Some of the best scenes in Oslo, August 31st are ones where Anders is just observing other people. The film opens with two people talking about Oslo as we get a street view of the city. Another scene where we listen to a girl in a café read off things that she'd love to do. Even something as simple as Anders just lying on his back in the park means more. The film is more about Anders' struggle with depression rather than addiction. At least that's what I got out of it. Being in Oslo, he's forced to see what the consequences of his actions have caused. He's not married, has no children. When he looks at his friends, he sees what he could've have, and he's afraid he never will.
This was a very dreamy film to watch. I felt so aware of the surroundings through Anders' eyes. Oslo is a beautiful city, but to him it's a city that he will never fit in. This makes the ending even more heartbreaking.
Grade: A
Memorable Quote: "Look at me. I'm 34 years old and I have nothing." - Anders (Anders Danielsen Lie)﻿